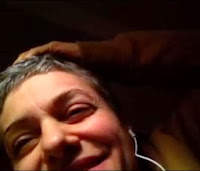 "You have the body of a woman", my partner tells me over Skype. "It might be better to accept that fact, accepting what is, rather than suffering over what isn't. Not that you can't change it if you wanted to, but it may be better to try to accept what is." There is an awkward silence on my side of the digital connection as she senses my uneasiness. The reality of my having breasts is an uncomfortable fact that I have worked hard to accept. Her face seems to reach out to me as she says "I love you, I love them, you know that and I think I wish you did too".


A backlog of thoughts packed into my brain are all pushing for release in response to her attempts at helping me find peace with this angst that I sit with. I don't know how to unravel my thoughts or where to begin in order to respond, the past or the present. Here we are talking about the pain of acceptance, or more accurately, the pain of my avoidance over the years to my change body due to the fear of being seriously stigmatized. Everything in the culture at that time told me that changing my body or even acknowledging that I wanted to change my body, would indicate that I was really "crazy". Let's remember that the late-1970's are light years away from this era of transgender consciousness and activism that we are living in now.

How can my genderqueer feelings, the feeling of inner maleness, while having a female body and choosing not to change that body, be understood by a woman that is completely at home in her female body? A lesbian, a woman who loves women, who is invested in my having breasts, for her to love. Her expressions of jealousy at the beauty of my breasts, the breasts I have wished were not mine, wished would not grow as a young child, feels uncomfortable. Like the jealousy of someone wishing they had the wife you have, yet they don't know that you secretly wish you were divorced because that wife is the symbol of what you loath in yourself: your dependency, inability to be alone, fear of the emptiness of being single. I should note that I have grown through those fears and enjoyed being single these past few years in a way I could not have previously imagined. The fear of the emptiness I was so sure I would find was actually the opposite. I felt very full within the space of my alone time. A space where I could breath and just be with the self I have grown to love. I no longer use people to fill myself up, in an attempt to avoid myself, to avoid what I feel and I have grown to accept my body too. At 52 years old this body has finally become a good companion. The dissonance of my female body has lessened as I have grown to accept the body I was born into and yet, it is not a physical representation of who I know myself to be. A bold statement, sounds like my continued dissonance, gender dysphoria or transsexual feelings that I never truly worked through. The writer, Pat Califia, spoke about her process with gender dissonance in her book, 'Sex Changes, The Politics of Transgenderism' (1997). Pat spoke about of her inability to separate her personal ambivalence about being female from the misogyny and homophobia in the culture, and so had decided not to pursue changing her body (at that time). It sounded like a conscious decision to try to embrace her body, maleness and femaleness. In 1999, at 45, s/he decided to transition from female to male. Now he goes by Patrick. (Wikipedia)

For me there has always been a grief process involved in the process of embracing a female body, the grief of limitations, real or imagined or culturally imprinted into my psyche from the misogynistic era that I grew up in having a female body and not a male one. I am not male and would not be "male" even if I were to have sex reassignment or gender reassignment (hormones only). I want to reiterate that these are my personal feelings about transitioning and not a comment on anyone else's experience or what is true for them. What gives me most peace is the understanding that I am two spirits in one body, living with an energy other than a female energy, some call it "male", some call it "butch" and some call it being "genderqueer". My experience of being genderqueer is living with a blend of energies, a sense of self or identity that isn't based on the physical body, but on the energy within that physical body. It can be very confusing to not want to change the body to fit the culture's binary concepts of maleness and femaleness that we still live in. If you are not this, then you must be that. Thankfully today there is also a growing consciousness that you can be more than just this, or that. Long live consciousness!

Genderqueer Pie Please came into existence at the encouragement of Maggie, the new woman in my life. Please pull up a chair at our table and let us enjoy a slice of your genderqueer pie story.
Posted by Unknown at 3:45 PM