I think it is important to give a perspective on why I began this blog. I wanted to a give a voice or my slice of the pie, one voice among the many voices of my tribe: people who are 50+. Most of the blogs that I have seen are by and for young people. There are many blogs out here and they seem to be sprouting up quickly, which I love, but all of the imagery, and content seem to be mainly about younger folks.  It's so important that we all have a voice, young and older or let me say those of us that have been on the earth longer, and have a different perspective to share. 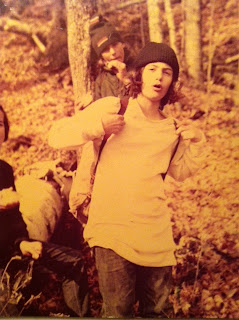 I realized as I was surfing the GQ sites that there is a real perspective shift related to age and era. Let me try to unravel what I am trying to say. Tagging onto my first blog entry, the gender shift of consciousness began for me in several stages, beginning when I was about five years old which was in 1965. Yep, quite a long while ago. In elementary school I was clearly, to the outside world, "a tomboy" (the photo is me at 12 years old, 1972) or mistaken for a boy and on into high school in the 1970's I was seen as "androgynous" or called in a derogatory way "a butch dyke".

In the 1970's one of my high school female friends was lovers with a person we might now identify as a transman. Her lover would bind her/his chest and being older than my school friend, he worked in the next town over and passed as a man at his job. Around that time I also had my first short-term relationship with a woman. My lover was not comfortable with her gender and would bind her chest too, and spoke of wanting to have an operation to change her gender, something she certainly couldn't afford. We would joke that we were actually two male homosexuals because we both had issues with our gender.

It was about 1978 and being a teenager I was just trying to figure out what it all meant to me. Was I trans, like my first girlfriend, because I loved women or was that just "internalized homophobia" from a "homophobic" culture (a concept that wasn't yet used in the 1970's) and should I have just embraced my attraction for women as an indication of a lesbian identity? All the while I was also still trying to suppress and understand my uncomfortableness with my own maturing female body. I had many unanswered questions about my gender, like: was my uncomfortableness with this female body a result of the misogynistic and homophobic culture that I had grown up in? Did it have to do with the fact that the Lebanese side of my family, being somewhat misogynistic, like my "sittu" (grandmother) who would poke me in the ribs to stop talking at the dinner table whenever a male relative would begin to speak? If nothing else, that experience taught me a painful lesson that a male voice was much more valuable than my young female voice. All I knew as a teenager was that I was definitely girl crazy, and whether I was comfortable with my body or not, I just had to get a girlfriend.

Pull up a chair at the table and share a piece of your genderqueerpie story.
Posted by Unknown at 11:57 PM 2 comments:

A Slice of the Pie

Genderqueer isn't a new movement, it isn't even a movement, or new, it's been around a long, long time, as long as I can remember. Ways of being "out", seen, heard, and conceptualized are continuously being created through our use of language, and not just by the so called sexual minority, but by everyone. Genderqueer is one of those fairly recent creative wordage attempts at redefining a lived experience of gender that is a reality for a portion of the population.

When I was five years old my best friend Tommy wanted me to join the boy's club set up in another boy's backyard. I remember standing next to my buddy as he asked the boys in the club house, "Hey, can she join our club too"? The two boys looked at us puzzled, as one of them said, "No, she's a girrrl"! Tommy looked surprised as he turned to look at me, and quickly turned back to them saying  indignantly, "No, she's not!" The boys looked at me again to confirm what Tommy had so passionately explained, that I wasn't "a girrrl". After all he knew me best, I was his best friend and army buddy. We would spend hours in the back lots out behind our homes as we crawled through the high grass and dirt so the enemy would not pick us off with their guns. Of course, we always saved each other from the "bad guys" until our mothers called us in for dinner.  Realizing their mistake, that they clearly weren't seeing me at all, they eagerly agreed to let me join. "Ok, sure", they said, with new found excitement to have a new kid join their secret club.

Gender is both biological, and a complex set of learned behaviors strongly reinforced by the culture that you live in. I lived in Rome, Italy for a few years, 2006-09, and discovered some interesting, and what seemed like contradicting ways of gender expression. On the one hand, Italy still has rigidly reinforced codes of gender behavior, in which one does not cross the line without a great deal of disapproval and perceived disrespect for the other's gender role. I recall being in a beautiful coastal town with mia ragazza (my girlfriend), and her father and his girlfriend. When we stopped to have some espresso, I paid for our drinks and as we left the coffee bar, I held the door open for my girlfriend's aging father. To my total surprise, my act of chivalry was more gender-bending than he could tolerate and after the women had walked through the door he shoved me through the door with great force and disapproval. My American "butch lesbica" (butch lesbian) gesture of chivalry was perceived as disrespectful to his Italiano machismo. I was clearly stepping on his gender role. Other aspects of Italian gender expression are the ways that men, and women are much freer in their expression of physical affection within their genders, certainly much freer than Americans, but they still can't cross over the gender line. It is common place to see young women holding hands, or walking down the street arm and arm, or to see young men embracing each other, not just momentarily but holding each other, arms stretched out over each others shoulders while out socially with their peers. I'll never forget the first time I saw two young men, as they raced by on a Vespa calling out to another male friend standing in front of a store, "ciao bello"! (hi, beautiful!). My mind raced to categorize this unfamiliar vision. Were they gay? Where they teasing their friend? No, they were simply calling out to a good friend with a common expression of affection within their culture. In Italy the beauty of the body, and the beauty of manhood or womanhood is always celebrated in a very proud, and social way.

Speaking with people curious about what a genderqueer identification actually means, has made me look at what it isn't. This always strikes me as an easy first attempt to explain what something is by looking at what it isn't first. When you are genderqueer, biological gender aside, you aren't male, and you aren't female, you are somewhere in between on the spectrum of gender expression, and/or gender identification.

In my twenties, when I was trying to figure out how to make a living, I worked for a time as an assistant teacher at a progressive school in New York's West Village. Since I am somewhere in between female and male, leaning closer to the male side of the spectrum, the children I worked with always assumed I was "a boy". "She's a boy silly, can't you see she has boy's hair", said Rebecca to a few of her classmates as they were pondering over the assistant teacher's gender. Rebecca was a four year old who would always run to sit on my lap at story book time and another example of a child's ability to see the truth in others. Working with children was the beginning of trusting my own unspoken truth, trusting what I felt, as children do instinctively. This was in stark contrast to what I had already internalized from society about my inherent badness as a sexual minority and certainly as someone who had crossed the gender barrier.

I had always known that I wanted to marry a woman like my mother and be just as handsome and creatively intelligent as my father. As far back as I can remember I "felt like a boy". There was no need for discussion, I knew who I was, I was a boy. The way everyone around me related to me also confirmed my inner sense of "maleness". My best friend Tommy had insisted that I join his boy's club, my girl friends were always wanting me to play the daddy or husband or boyfriend role with dolls and people in general were constantly mistaking me for a boy. This feeling of maleness was also validated by some adults in my life. When I was about five or six years old my British grandmother, who was a very progressive woman for that time, had come to our home for a visit with her friend George. They were both writers who lived in the West Village. I remember George as a very jovial man, with a big laugh, and big warm hands. I had expressed liking his shinny looking shark skin green tie, and before I knew it he had taken it off to give to me, and wanted to show me how to tie it. I remember standing in front of the mirror with him standing behind me showing me, step by step, how to tie the tie. I never forgot how to tie a tie or that moment of loving validation.

Is genderqueer a word that also encompasses the identification of butch lesbian? Is butch lesbian an old identification for being genderqueer? If not, what is the difference between them? And where is the line to be drawn between genderqueer and transgender and who draws the line? Does a line even need to be drawn? Clearly many folks feel that lines do indeed need to be drawn, even if those lines are moved back and forth in the sand as needed. There is a definite need to define the question: Who am I?

Genderqueer Pie Please came into existence at the encouragement of Maggie, the new woman in my life. Please pull up a chair at our table and let us enjoy a slice of your genderqueer pie story.