I'm sure it comes as no surprise to anyone that this was an actual exchange that I had when I was buying a soy chai latte at a Starbucks in a town just outside Portland, the barista poised to write my name on my cup. I have had this same conversation countless times. For some people, no matter how slow I speak or how loud I speak, just can't hear my name or can't take in the fact that I am saying, "I'm Jake." On the other hand, I am always pleasantly surprised when I'm asked my name by a cashier or waitress, and they casually recite back, Jake, as they write my name down, without a blink of an eye. Is this just PC BS? Or is there an actual positive non gender conforming consciousness out there in the world these days? Being consistently questioned about something as basic as your name is quite a strange experience. I would really be perturbed, I imagine, if I was transgender and not genderqueer, and someone were to still question the gender association of my name because I didn't appear Jake enough.

It seems if I were to do an unofficial sociology study (studying people with problems with gender non-conforming people like myself) on people's reactions to my saying, "Hi, I'm Jake", they would fall into several categories. It does appear that most heterosexual people (just my assumption), approximately over the age of 60, both male and female can never hear my name as, Jake. With this population I usually get the, "what, did you say Jane?"  People of various ages, that appear to be what I identify as "hipster straight folk" or LGBT (again just my stereotype bias based on type of dress style: large earrings on men, full sleeved tattooed women with strong arms, etc.) they have no problem at all hearing my name, or understanding that I clearly must be trans or genderqueer or maybe just an old butch dyke with the name of Jake. The young twenty something, heterosexual, conservative Republican set, male and female, seem to be deaf altogether. Again, I have no idea as to how these young conservatives identify regarding sexual orientation or gender identity, and I don't usually ask the folks at Starbuck's if they are queer or non gender conforming before I ask for my soy chai latte, but I guess I could start asking. I have an 83 year old, heterosexual, female friend named...Billie. I wonder if she was ever questioned about her name at a Starbucks when ordering a pumpkin spice latte?

Genderqueer Pie Please came into existence at the encouragement of Maggie, the new woman in my life. Please pull up a chair at our table and let us enjoy a slice of your genderqueer pie story. 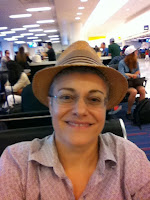 When you 'take a ride on the Reading Railroad' then you know you are on a track. It might not be the track you thought you would be on, but a track none the less, and there is always the potential for passing go and collecting two hundred dollars. My sister's husband passed go without collecting $200, and went straight to jail. I headed to the North West. There are always those people that have a certain direct trajectory. They know exactly where they are going, or so they think. Others of us aren't so dead sure. There just isn't a way to know for sure where you want to be unless you hear something inside that says...this is it, jump, get on that train! Then there are the people who just go with the first possibility, they don't wait, think, assess, ponder this or that, they just go with the first opening, and see where it takes them. Me, well, I have done both. I have gone with the first choice or request, or glance from an interested party and then wham...it is 10 years later. My rough edges have been smoothed out, maybe I am sporting a somewhat better clothing style, or sometimes my edges or what makes me, me, my fire, passion, red, and yellow beautiful strong flames have been smothered out with little oxygen to breath, and then I have to save my own life.

In the present moment I find myself in a strange place. I'm not sure which seat I am sitting in. I have done a lot of sitting in my life, especially now, and yet, I am not clear on where I am sitting. I'm not even sure where I am, and I do actually mean this quite literally. I moved from the east coast to the north west coast about 5 months ago now, and maybe it is the New Yorker in me, but...where the hell am I? There are some landmarks that give me some sense of direction or placement within the broader context, but if you look up close at the details, or nuances of any given Portlander you see something quite different from what you have known. Here there is a slower, kinder way. People listen to you. They actually listen to what you have to say. In New York the majority of people don't really listen, or if they do it is for about 10 to 15 seconds before they are off hurrying down the street. People in New York seem to always be in a hurry. They may not have anywhere to go, but they do it in a hurry. It is almost impossible to not get swept up into the mentality or habit of hurrying. You have to understand I am a New Yorker saying this, so you know I carry some real authority on the matter. I have lived in the boroughs of New York since 1980, that's about 32 years, since I was about 20 years old.  I can remember as a young 20 year old sitting on the subway in 1980 and being so puzzled by the complete stoic neutrality of the people on the subways despite all of the loud music from various boom boxes, and the often strange characters dressed in wild garb and acting just as oddly or provocatively as they wanted. No one, unless they were an out of towner payed any attention to the chaos in the subway. I quickly learned that being neutral, no matter how bizarre someone appeared or acted, and walking fast, often away from such people, was the way to survive in New York.

A few years ago I lived in Rome, Italy for two years. It took about six months for me to slow down, and actually be right where my shoes were. When I returned to live in Manhattan, I actually flew in the night Obama was declared president, I felt overwhelmed by the speed at which the whole city moved. I had actually forgotten that constant state of hurriedness. Everyone was in a hurry. Now, here, in the Pacific North West there is a similar way of being that I experienced in Rome. Portland certainly isn't Rome, although they do pride themselves on their coffee almost as much as the Italians do. Portlanders also don't have that slow as molasses like movement of the Italians when walking down the street, but there is a slowness here that you just don't find in New York. I have read that some of the differences of east coast transplants and Portlanders are that when at a party the New Yorker asks people, "What do you do for a living?" and the Portlander will ask, "Are you a blogger, or are you in a band?" Italians also rarely ask people what they do for a living, probably because their work climate is so dysfunctional and depressing to most Italians that they just avoid talking about it. An interesting similarity though is that Italians like Portlanders are not obsessed with making money like New Yorkers. You can't really blame New Yorkers, it does cost an arm and a leg to live in Manhattan these days, or as they say in Italy, "costa un occhio della testa" (translation: it costs an eye of the head). I can remember one time in Palermo seeing the quick comical gesturing of a Sicilian woman tilting her head as she held out her hand as if to catch her eye from falling out of her head to indicate to a friend she was shopping with how expensive a piece of jewelry was in the shop. It certainly does 'cost an eye out of your head' to live in New York which is why so many people there are rushing off to work or rushing home to try to use the few hours they have to relax before they have to get up and rush off to do it all over again. This is also why it is so hard to connect with people in New York. Trying to schedule a time to go for coffee or dinner can be very stressful. People have little time to see each other because they are hurriedly trying to make enough money to live, or rather survive, in the city that never sleeps. Portlanders, on the other hand, don't seem to care about how you make money or how much money you make, but this may not really be the case since I am still new to these parts I can't yet read very well between the lines.

Genderqueer Pie Please came into existence at the encouragement of Maggie, the new woman in my life. Please pull up a chair at our table and let us enjoy a slice of your genderqueer pie story.
Posted by Unknown at 5:38 PM No comments:

up comes that familiar uneasiness about the possibility of transitionings reality,

but I know it won't be long,

Well, I'm putting up resistance, but I know my faith will lead me on,

I've got some time to search my soul. 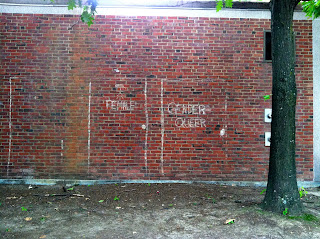 Pull up a chair at the table, and share a piece of your genderqueerpie story.
Posted by Unknown at 2:20 AM No comments: